Joshua Friedman is a skilled litigator with a proven ability to obtain successful outcomes in a wide variety of sophisticated legal matters.  He focuses his work at the firm on counseling individuals and organizations in employment disputes and civil rights matters, representing accident victims that have suffered serious injuries, and defending individuals and organizations accused of criminal wrongdoing in both state and federal court.   He has successfully argued on behalf of clients in both trial and appellate courts and in a variety of administrative forums.  His clients have included individuals, local municipalities, small family-owned businesses and Fortune 500 corporations.

Josh began his legal career clerking for the Hon. Elizabeth A. Garry of the Supreme Court, Appellate Division, Third Department. In that role he had the honor of helping to research and draft decisions in numerous high-stakes civil and criminal appeals from the trial courts in 28 counties.  He then entered private practice as an attorney at another well-respected Capital District firm where he worked representing clients in both civil litigation and transactional matters.

Josh is a member of numerous legal organizations, including the Albany County Bar Association, New York State Bar Association, and New York State Trial Lawyers Association.  He has been recognized as a “Rising Star” by Super Lawyers in the area of plaintiff’s personal injury and  “Top 40 Under 40” attorney in the area of criminal defense by The National Trial Lawyers.  Outside of work Josh volunteers his time for numerous local causes.  He currently serves on the Board of Directors for the Crohn’s & Colitis Foundation, Upstate Northeastern New York Chapter and is an active volunteer for the Albany County Family Court Help Center, Congregation Beth Emeth Soup Kitchen, and Albany Law School Alumni Initiative in Mentoring. 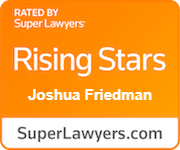 Get your FREE consultation. No obligation. Completely confidential.

Our Awards and Accolades